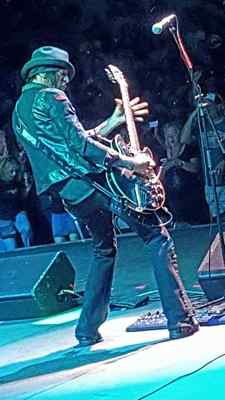 DETROIT — It was a beautiful night for a stroll on the RiverWalk, but the crowd at the Chene Park Amphitheatre on Saturday, Aug. 6, took a stroll down memory lane with 80s hard rockers L.A. Guns, Lita Ford, Warrant and Ratt.

It was a dream bill for anyone who might have frequented Hollywood’s Sunset Strip back in the day, and judging by the enthusiasm in the almost half-full venue, quite a few metro Detroiters were ready to relive those glory days. The bands were more than happy to oblige at full throttle, especially after Minneapolis quartet Downtread set the tone (loud) for the night with it aggressive 25-minute opening set.

Touring veterans of 30 years, the four-piece L.A. Guns came on looking like time stood still. Guitarist Michael Grant prowled the stage in his trademark military hat and vest, oozing Rock Star vibes while firing familiar riffs from his guitar. L.A. Guns decided to “Show No Mercy” right from the start and squeezed in fan favorites “Sex Action,” “Never Enough” and “The Ballad of Jayne” during its truncated 30-minute set.

British-born lead singer Phil Lewis showed that years of touring haven’t diminished his voice; Lewis brought his A-game to town on Saturday, along with a few F-bombs and references to “wankers” interspersed into stories that the Chene crowd ate up. “We would play all (expletive) night,” Lewis bemoaned, “but we have to get off!”

After a prompt stage change, Lita Ford strolled onstage the sounds of engines revving and a taped voice chanting “I want my Ford!” before breaking into “Gotta Let Go” with the three members of her band. The opening was fitting for the Motor City, and Ford voiced her love for Detroit again when she reminisced about her first time ever playing Cobo Hall during the 70s with her band the Runaways, opening for Tom Petty & the Heartbreakers and Cheap Trick. “The crowd charged the stage with knives to get Tom Petty and Cheap Trick off the stage,” Ford recalled. “They wanted to see the Runaways, man. Detroit is rock ‘n’ roll to the max!” “Living Like A Runaway” immediately followed, along with the Runaways’ “Cherry Bomb” later in the nine-song set.

Ford’s signature double-neck guitar came out for the latter, and she also played it on “Close My Eyes Forever,” with Ozzy Osborne’s duet parts covered by guitarist Patrick Kennison. “Kiss Me Deadly” closed her set with an audience singalong.

The crowd got involved during Warrant’s set as well with a rousing rendition of “Happy Birthday” for lead singer Robert Mason. The sun had gone down and the “Down Boys” were in fine form as the audience crowded closer to the stage. Bassist Jerry Dixon hopped up on the drum riser in front of Steven Sweet, while guitarists Joey Allen and Erik Turner worked their sides of the stage and each other’s with the ease of musicians who have played together for years as the band ripped off hits such as “Big Talk” and “I Saw Red.”

Mason was a whirlwind of energy, blonde hair flying out behind him as he ran to the front of the stage and then back to the amplifiers, twirling his microphone stand and even throwing it offstage to a waiting tech at one point. A trio of favorites — “Heaven,” “Uncle Tom’s Cabin” and “Cherry Pie” finished off Warrant’s hit-filled hour.

The show wasn’t done yet, however. The fans came “Back For More” when headliner Ratt finally got started. The players were solid, though some stage missteps made it apparent that this lineup of the quintet, led by original drummer Bobby Blotzer, hasn’t been touring together for all that long. Lead singer Josh Alan recreated Stephen Pearcy’s vocals on “Dirty Job,” “Lay It Down” and “Body Talk” despite some difficulties with the sound early on. Exuding youthful energy, Alan ran across the front of the stage several times, high-fiving the audience like an athlete taking a victory lap. He had everyone on their feet for “Dance” and lighting cell phones during “Closer to Heaven.”

After that break in the action Ratt came back strong with well-known hits “Way Cool Jr.” and “Slip Of The Tongue” before rounding out the night with “Round and Round” to the delight of the crush of people still crowding towards the stage.

Despite being a hard rocking night, there was still an element of family and a generational passing of the torch. There were numerous children in the audience — Ford even brought one young girl on stage to proudly display a sign reading “Lita you are the reason I make music” — and Warrant’s Allen and Ratt’s Ellis both allowed youngsters at the front of the stage to pluck their guitar strings. It was a night for reliving youthful memories from the glittery heyday of hard rock and for letting kids live out their fantasies on a glorious summer night — because, at some point, doesn’t everyone dream of growing up to become a rock star?